Running footwear, like most every industry, is susceptible to changing popular trends and the comings and goings of various fads. Most readers are probably at least passingly familiar with the rise and fall of the minimalist running shoe trend, which was ushered into popular consciousness with Chris McDougall’s book Born to Run, and eventually fell out of favor in the wake of lawsuits against that most prominent proponent of minimalism, Vibram.

The casual observer of the running industry can certainly be excused for feeling a bit in the dark about the current state of running shoes. If your experience with running footwear is limited to perusing the occasional articles posted by your Facebook friends, you’ve witnessed minimalist running shoes go from the anointed savior of running and the solution to all of your running-related problems, to a dangerous anathema and a near- guarantee of multiple stress fractures in your feet/lower legs. Confusion and apathy are two reasonable responses to this ridiculous swing of the running footwear pendulum. The intent of this series of blogs is to demystify some of what has gone on in the running shoe industry over the past 10 years or so, in order to make sense of where we are now.

This first installment of the blog will focus on one particular feature of running shoes that has recently become all the rage: “drops.” We will start with drops because I believe low- drop shoes are one offshoot of the minimalist running trend that actually have some real staying power. As the dust from all of those injured people running around in their Vibram Five-Fingers clears, we will be left in a running shoe world with far fewer minimalist running sandals, and far more low-drop shoes.

“Drop” is one of those buzzwords that has been floating around the running industry for awhile now, with some people obsessing over it to an absurd degree (“I can only run in a 4mm drop shoe”- this is almost invariably a false statement), while others are generally aware of it (“I’ve read about ‘low-drop’ shoes… Is that something I should try?”), and still others have remained relatively ignorant of the trend (“You mean the shoe, like, drops when you run or something? Okay… I don’t get it.”).

So what does the “drop” of a shoe mean? Quite simply, it’s the height difference between where your heel is sitting and where your toes are sitting in a shoe (also known as the heel-to-toe differential or offset). So, in a “zero-drop” shoe, your heel and toe would be on the exact same level (with zero millimeters of “drop” between them), completely parallel with the ground beneath you. It follows, then, that in a 4 millimeter drop shoe, your heel would be propped up 4 millimeters higher than your toes down in the toe-box of the shoe, resulting in a slight downward slope, or drop, between your heel and your toes. Running shoes have traditionally had 10-12 millimeter drops, meaning that, in these traditional shoes, your heel is propped up pretty high relative to your forefoot/toes. 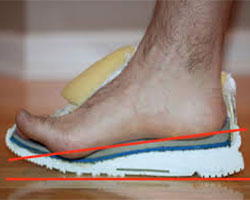 Cross-Section of a shoe, showing the heel-to-toe differential
(Image courtesy of veggiefueledrunner.blogspot.com)

Why do we care about drops?

Well, why does the drop of a shoe matter? Our answer comes from the biomechanics of the running gait, and specifically the foot-strike. Theoretically, the drop of a shoe can affect the way your foot comes into contact with the ground when you run, with a lower- drop shoe facilitating (again, theoretically) the highly coveted “forefoot strike” that many biomechanists and coaches tout as the most efficient (and injury-resistant) way to run. There is much ongoing debate on this topic, but for the purposes of this article, I will stick to a surface-level theoretical explanation of why forefoot running is “better” than heel-striking or other methods, and how low-drop shoes are supposed to help you transition to this optimal style of running.

For simplicity’s sake, lets assume that there are only two ways to run, forefoot striking and heel striking. Heel striking usually means that the runner is overstriding, landing far in front of their center of gravity, and thus braking their forward momentum a bit with each stride. In this example, the runner lands with a mostly-straight leg, and the impact of each stride is taken first by the heel, before radiating up through the leg into the hips and the back of the runner. If this sounds painful, it should, because it certainly can be.

While heel-striking concentrates impact first on the bony protrusion of the heel, and then up the straightened leg into the hips and lower back, forefoot striking takes advantage of the body’s natural biomechanics and elasticity. When you land on your forefoot, you are landing almost directly under your center of gravity, with a slightly bent leg. Your toes splay out to disperse the impact of the step, and almost simultaneously, your achilles tendon is loaded with the elastic energy generated from the impact force. As your heel comes down to the ground and then lifts off again as you roll into your toe-off phase, that elastic energy is released and helps propel you forward. In this example, the impact of each stride is dispersed across a number of tendons, muscles and joints, all of which work together to lessen the jarring jolt of each step. 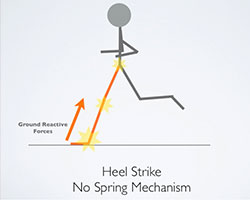 In a low-drop shoe, your gait is less likely to be impeded by a disproportionately cushioned heel. Think of your lower legs operating in a circular orbit when you run, with a ground-contact point below and just slightly in front of your center of gravity. If you overstride and heel-strike far in front of your center of gravity, each circular orbit is cut off short of completion. Theoretically, the lower the drop of the shoe, the easier it should be to contact the ground with your forefoot first, without a bulky heel getting in the way.

So, what’s the difference between a low-drop shoe and a minimal shoe?

So as time seems to have proven that true minimalism may not be the godsend it was initially made out to be, the running industry has been careful not to throw the baby (lower-drop shoes) out with the bathwater (“true” minimalist footwear). The staying power of the whole “low-drop” movement is evidenced in part by the fact that Saucony has started to prominently display the drop of its shoes on the insoles and sometimes on the heel of the midsole. Saucony has also lowered the drop on many of its stability and luxury neutral shoes to a moderate 8 millimeters, while its lightweight standards like the Kinvara and Mirage sport a flatter 4 millimeter drop. 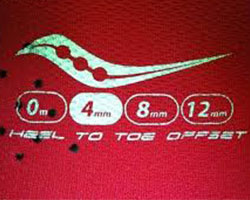 While it is helpful to understand low-drop shoes as an offshoot of the minimalist movement, it is important to note the distinction between a low-drop shoe and a minimalist shoe. Just like squares and rectangles, all minimal shoes are low-drop, but not all low-drop shoes are minimal. Perhaps no brand illustrates this relationship better than Hoka. Anyone who has ever seen a Hoka can tell you immediately that “minimal” is not a word they would use to describe the shoe. In fact, Hoka is part of a relatively new trend in running dubbed “maximalism.” These shoes are large, to put it lightly. But while Hokas and similar maximal brands stack seemingly gratuitous amounts of cushioning underfoot, they also tout relatively low drops, maintaining a foot position that is nearly parallel relative to the ground below. Keeping a relatively flat foot positioning but eschewing some of the more extreme tenets of minimalism has allowed shoe companies to focus on a natural ground contact (forefoot/midfoot striking) while taking full advantage of the protection offered by current cushioning technologies.

The Hoka Bondi- clearly not a minimal shoe, but a shoe with a minimal drop
(Image courtesy of slowtwitch.com)

Transitioning to a lower drop

If you are thinking about taking the plunge into a low drop shoe, make sure you do so responsibly and incrementally. If you are used to running all of your mileage in a shoe with a big heel and a 10-12 millimeter drop, it is not smart to immediately ditch those shoes for a pair of lightweight 4 millimeter drop shoes. The danger in this situation is that, when the heel is lowered in your shoe, the loads on your achilles and the other tendons and joints of your feet are increased. These increased loads (especially those on the achilles) will most likely manifest themselves as pain in the calves. Taking away 6-8 millimeters of support underneath your heel is essentially asking for an equal increase in the range of motion needed from your achilles, your ankle, and the joints and tendons of your foot. In order to avoid the complications that could arise from this increased loading, practice moderation in your transition to low-drop shoes. In the above example, the runner accustomed to a shoe with a 10-12 millimeter drop could safely transition into an 8 millimeter drop with little to no complications. After becoming fully comfortable in an 8 millimeter drop shoe, the runner could start to do about 10% of their weekly mileage in a lower-drop shoe (4-6 millimeters), and increase that number by 5-10% each week as they feel comfortable.

Of course, it is important to remember the admonition of professional runner and Oiselle mogul Lauren Fleshman, who told Lindsay Crouse of the New York Times, on no uncertain terms, that “there is no shoe savior coming for us.” Basically, it can’t be all about the shoe. There are many strength and form drills that can help develop the mobility, strength, flexibility and running “skill” needed to run correctly and optimally in low-drop shoes. This is a topic for another post, but for those interested, here is a good article.